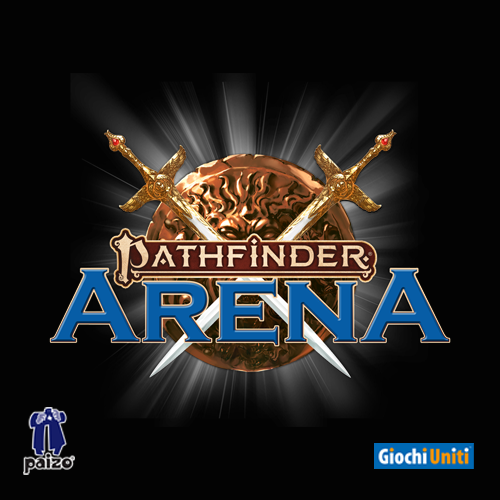 GIOCHI UNITI AND PAIZO TO CREATE PATHFINDER ARENA BOARD GAME

Crowdfunding campaign for the competitive strategy game set for 2021.

NAPLES, ITALY (October 22, 2020): Giochi Uniti and Paizo Inc. will release Pathfinder Arena, a new board game set in the Pathfinder roleplaying game’s fantasy fiction Age of Lost Omens setting. The game will be available through a crowdfunding campaign in 2021.

Pathfinder Arena is a competitive strategy game divided in four stages of challenges between monsters and heroes. In each stage the number and power of monsters increase, while heroes level up and gather resources to gain new skills, magic spells, equipment and the deities’ favor.

The monsters summoned in the labyrinth never leave their spot, but the labyrinth shape is dynamic and players can change it by moving the board’s tile. Monsters can then be used to attack other players: there will be only one winner.

Subscribe to the Pathfinder Arena webpage to be updated on this project and be notified on the crowdfunding campaign: https://www.giochiunitiinternational.com/pathfinder-arena/

Paizo Inc. is one of the world’s leading hobby game publishers. Since 2002, millions of players have joined the goblin army by playing the Pathfinder® and Starfinder® Roleplaying Games in homes, at conventions, at their favorite local game stores, and digitally on virtual tabletops. Paizo.com is an online retail hobby destination for gamers that carries the latest products from top hobby game publishers. Players can also find the newest releases, as well as accessories like dice and maps, miniatures, T-shirts, goblin plush toys, to quickly replenish their adventuring supplies for the next dungeon run.

Giochi Uniti is an Italian board game publisher and distributor since 2006. It is well known at the international level for its long-selling Letters From Whitechapel and Kingsburg. Giochi Uniti creates board games with creativity and passion. Our mission is to gather people around the table to share unique moments and fun. In other words, Gaming is sharing.