Ready for Essen Spiel!05 Ottobre 2022Next 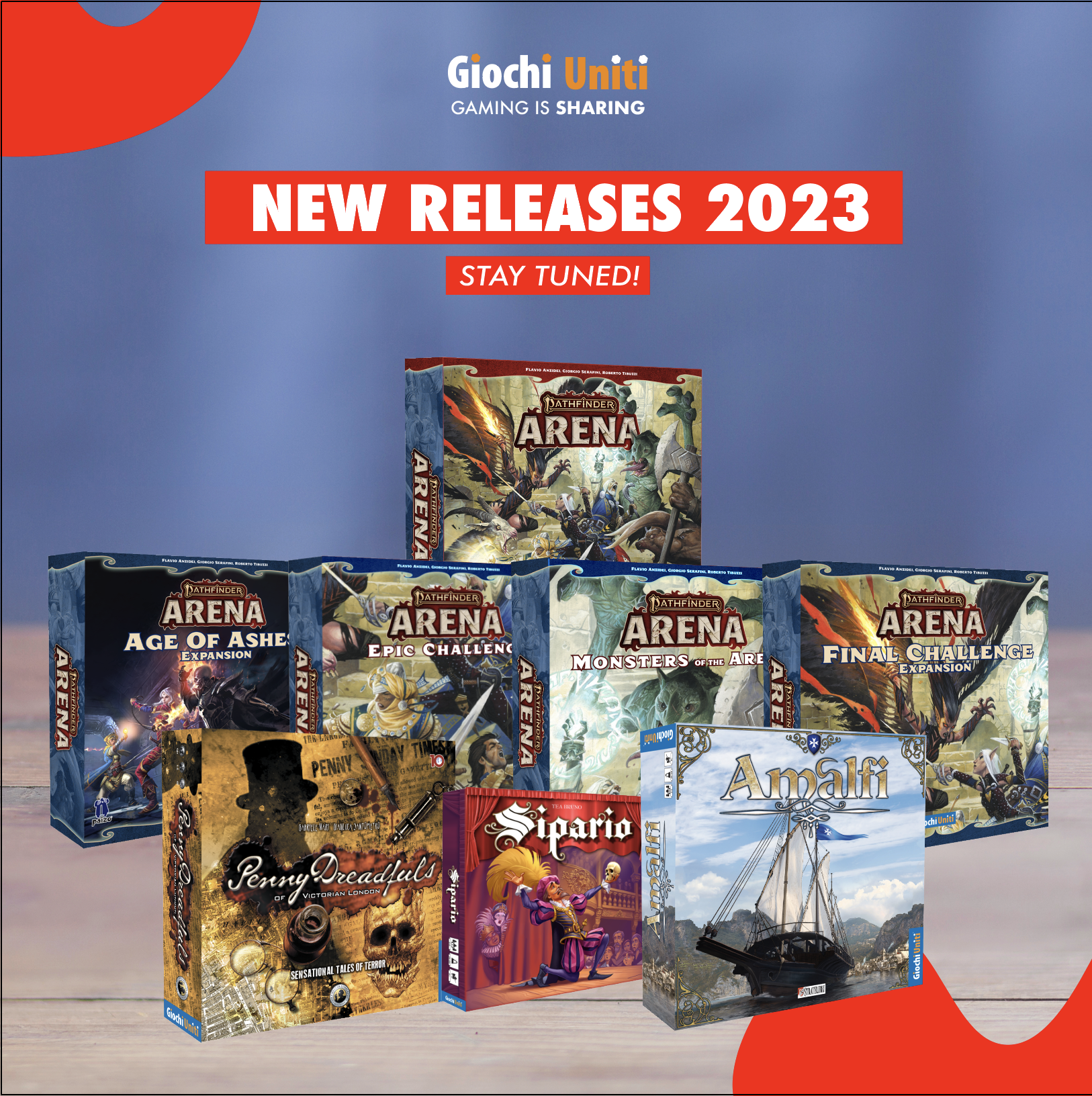 Once again, this year we have decided to play for real!

Throughout 2023, there are plenty of great new releases planned by United Games that we are sure will keep you excited and entertained like never before.

Let’s discover together the titles scheduled for release in 2023:

Pathfinder Arena is a board game set in the Pathfinder RPG’s “Age of Lost Omens”. Monsters and heroes clash in four stages of challenges in a labyrinth. In each stage, the number and power of the monsters increase while heroes level up and gather resources to gain new skills, magic spells, equipment, and the deities’ favor. This edition includes rules to play both the competitive and the cooperative editions of the game.

Pathfinder Arena, Monsters of the Arena

This box will feature high-detail miniatures of the most iconic monsters of Pathfinder. The creatures summoned in the Arena never leave their spot, but the labyrinth shape is dynamic, and players can change it by moving the board’s tiles. Players can then use monsters to attack other heroes, leaving only one winner. Since this box includes 14 unique monster plastic figures, it is intended to catch Pathfinder Arena’s players and the Pathfinder roleplay games community, and, more in general, every miniature collector.

The Epic Challenge enriches the Core set’s gameplay in components and game mechanics. As new iconic heroes, Seoni, the sorcerer, and Fumbus, the alchemist, together with their new spell, feat, and item cards, introduce new mechanics and new possible strategies for the players. Moreover, five new monsters (Black Dragon, Goblin Pyro, Gargoyle, Nightmare, Mummy) increase the variety of the game and add new monsters’ special abilities. Furthermore, the Trap tiles introduce an entirely new game mechanic. More accurately, they substitute some Arena tiles and teach a new way to score points. As soon as you reach them, firstly, you roll the summoning die to check if the trap is active. Then you draw a trap card. If you succeed in the challenge, you score glory points; otherwise, you get misfortune points.

Age of Ashes enhances the Core Set’s replayability by including a new hero (Nketiah) and new monsters (Skeletal Hellknight, Charau- Ka, Belmazog, Dragonshard Golem). They all come from the Age of Ashe’s adventure path, the first released for Pathfinder 2nd edition. It means that this item is the best option to combine Pathfinder Arena’s unique game mechanics with the feeling coming from one of Paizo’s most famous sagas.

The Final Challenge widens the variety of the game by adding three independent expansions in one single box. Primarily, two new monsters (Pit Fiend Devil and the Drider) enter the Arena, whose special attacks and abilities, such as the frightful presence, and the draw poison will pose new fearsome challenges to the players. Furthermore, the event cards add new special rules in every game. At the very start of the game, the players must draw 4 Event cards from the pile. Every round will be influenced by one of them. Lastly, the Potion expansion introduces utterly new game mechanics. More specifically, it includes both heroes’ and monsters’ potion cards, which provide them with unique powers. They work as consumable items, and they are the only tokens that heroes can collect on tiles different from the summoning ones.

Penny dreadfuls were short illustrated periodicals, very popular in the United Kingdom in the second half of the nineteenth century. They were very cheap booklets, costing just one copper penny, and offering short stories with vivid and popular themes narrated with an emphatic and sensationalist style. Despite the low cultural value, penny dreadfuls gave birth to a genre that has constantly evolved to this day.

In this competitive game with a strong narrative component, players each time not only follow a different story, which is told through a very particular deck of cards but also compete to win the game. In fact, through an elaborate auction and voting mechanism, which also depends on the outcome of the story, only one player is declared the winner at the end of each game.

Between the IX and XVII centuries, the maritime republics mastered trade across the Mediterranean Sea. They were Italian port cities that prospered and managed to keep political autonomy, thanks to their commercial influence. The oldest one was the Grand Duchy of Amalfi, which between the IX and the X centuries achieved its maximum splendor.

Amalfi is a competitive game, during which players, in the role of the Dukes of Amalfi, must deploy their fleet among ports in the Mediterranean. At the end of each of the 5 rounds, players who have deployed the most ships in a single port get a doubloon.

But beware! Those who know the sea know that you always must deal with the wind, which changes from one moment to another. In fact, during each round of play, only the cards connected to the “active” winds take effect. Moreover, only one of the players per round can control the winds, albeit only partially. Therefore, pay attention to the cards that the other players play uncovered, and try to guess those that will be played covered instead. In this way, you will be able to better plan your strategy, gain more wealth than anyone else, and become the most powerful merchant in Amalfi!

But there is more!

More brand-new games may be added to this list. We will give you more information about these titles over the coming months.

Are you ready to have fun with us?