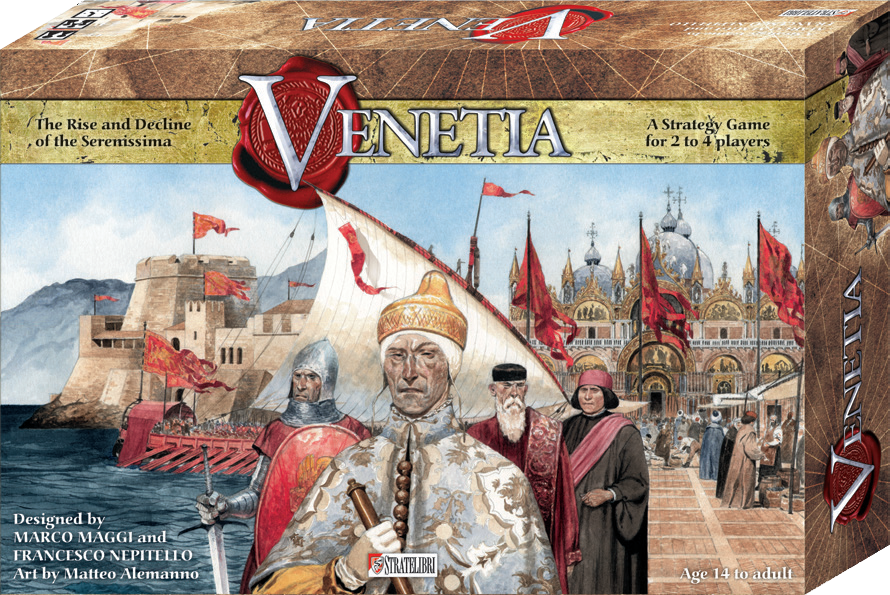 In Venetia, players compete to become the most influential noble family in the history of the Serenissima Republic. From its rise in the ninth century to its decline in the eighteenth, players take part in the golden age that built the city that once was the Queen of the Mediterranean. Each player controls a patrician household, vying for power against other families. To gain clout and fortune, players extend their influence outside the city, using commerce, diplomacy or military strength. As their authority spreads, the power of Venice itself increases accordingly, and distant ports fall under the sway of the Serenissima.

In the meantime, players compete inside the city for the coveted title of Doge, the head of the government, spending resources to gain popularity. Venetia includes extensive historical notes about some of the most important personalities of the city, its life, politics and warfare practices.

Combined with an exciting gameplay, this depth allows the players to fully immerse themselves in the history of a most unique city.

Venetia is published in ENGLISH by Giochi Uniti/Stratelibri. You can order your ENGLISH copy sending an email to info@giochiunitiinternational.com

Venetia is published in ITALIAN by Giochi Uniti. You can order your ITALIAN copy by this link.

This website uses cookies to improve your experience while you navigate through the website. Out of these, the cookies that are categorized as necessary are stored on your browser as they are essential for the working of basic functionalities of the website. We also use third-party cookies that help us analyze and understand how you use this website. These cookies will be stored in your browser only with your consent. You also have the option to opt-out of these cookies. But opting out of some of these cookies may affect your browsing experience.
Necessary Sempre abilitato

Any cookies that may not be particularly necessary for the website to function and is used specifically to collect user personal data via analytics, ads, other embedded contents are termed as non-necessary cookies. It is mandatory to procure user consent prior to running these cookies on your website.